Q IS FOR QUEENSRYCHE “MINDCRIME AT THE MOORE” 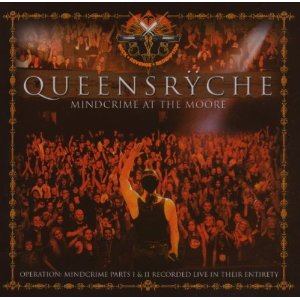 Queensryche is one of those bands (like Rush and Dream Theater) that must have managed to hold onto a following of loyal fans who actually (gasp) buy albums. Their trend has been new album, tour, live album and DVD for several cycles. I would imagine that the record companies would not continue in this vein if it were not profitable. As you can tell from the title of their new album, "Mindrime At The Moore," we are in the live album phase of the cycle.

Widely regarded as the band's masterpiece, the original Mindcrime was a concept album about disillusionment and revolution, with the obligatory tragic love story folded into the mix.

While not as good as the original (are sequels ever?), Mindcrime Deux was still better than you'd expect after 18 years and difficult to simply dismiss, but lacking the standout songs of the first album. MCII will always be overshadowed by it's predecessor, but there are still some good songs that give the sequel its own merits.

This live piece was recorded on Queensryche's 2006 tour, with actors and props helping to tell the story on stage, making the presentation more theatrical. The band is still there, rocking the house and doing Seattle proud, and there is even an appearance from the Seahawks Blue Thunder drum line-actually they take over the stage for one fo the coolest marching band bits ever. Casual fans would do well to purchase the two studio albums in addition (there is a story to follow here), but for the die hards this is a must-have.

I still kick myself for missing this tour.