J IS FOR JOURNEY “REVELATION” 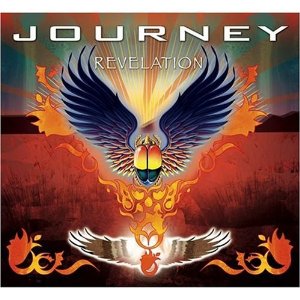 Journey went more than twenty years with Steve Perry handling vocals, but are now on their third singer in ten years. I liked Steve Augeri, and since I'm a fan of Jeff Scott Soto, I liked him as a replacement for Augeri and looked forward to hearing them collaborate on some new music.


Here they are with replacement number three, newcomer Arnel Pineda, fresh from the Phillipines via YouTube, and through the revolving door that is the Journey frontman position.

The WalMart-exclusive release comes with the new album, a CD of Journey standards re-recorded with Pineda, and a DVD of a live performance with Pineda at the microphone. At $11.88, you certainly cannot complain about the value.

But is it any good?

This album is pretty good, with strong performances and good songwriting. I do not think it will convert any of the Perry devotees (he's working on new material, by the way) but it certainly measures up favorably against the post-Perry catalogue, which I thought was pretty good. It does not break new ground, but if you like "Arrival," "Red 13," and "Generations," you will probably like "Revelation."

I still wish we'd have had a chance to listen to an album with Jeff Scott Soto..

After All These Years