BRUCE GETS HIS WOODY GUTHRIE ON 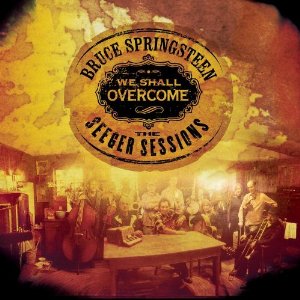 Anyone who has read my review of Def Leppard's "Yeah!" release already knows how I feel about covers albums. This is an album of covers by one songwriter. Guess what my opinion of this concept is?


One saving grace is that The Seeger Sessions follows close on the heels of Devils And Dust, so Bruce did not make us wait three plus years for this. Come to think of it, he has been somewhat prolific of late compared to his earlier years.

The seeds for this album were planted back in 1997 when Bruce contributed a song to a Pete Seeger tribute album. Bruce felt the need to one-up that concept, so he assembled a band and cut this album in three one-day sessions. These songs do go a long way towards capturing the breadth of American song, and the embodiment of folk's evolution.

This is not a bad album, and although it won't stay in rotation in my CD player as long as it may deserve, is does show Bruce aging gracefully and perhaps being passed the baton as the voice of American folk.

Sadly, Bruce has also taken to preaching his Socialist politics at concerts, which alienates those of us in his audience who do not share his view and just want to hear him play. Sorry Bruce, but when you rant against those nasty rich people-from where I'm sitting, you're one of 'em!

In 2007, Bruce released a double live disc (and DVD) of the Seeger Sessions band (in Dublin), performing tracks off the album and Springsteen originals rearranged to suit this lineup. A good souvenir of the live shows, and a good companion piece to a good album. But I'm keeping my fingers crossed for that rumoured E Street Band album coming later in the year...