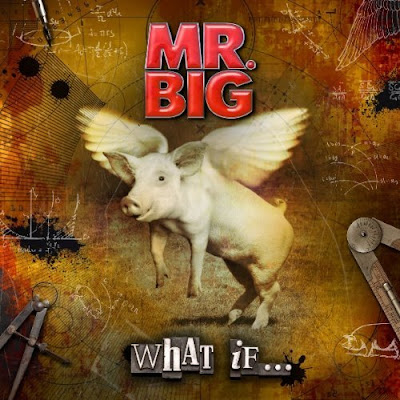 Mr. Big's original members return with their follow up to 2009's highly successful, “Back To Budokan” CD/DVD. "What If," their first studio album in 14 years, was produced by studio vet Kevin Shirley (Aerosmith, Rush, Iron Maiden) and is set to drop in early 2011 on Frontiers Records. A world tour will follow in March, launching in South America.

Formed in 1988, Mr. Big forged its place in hard rock history by combining trademark "shredding" musicianship with awesome vocal harmonies. The original line-up – vocalist Eric Martin, guitarist Paul Gilbert, bassist Billy Sheehan, and drummer Pat Torpey. Mr. Big produced numerous hit songs that ranged across a wide array of rock genres – be it ballads, heavy metal, or blues rock. Their biggest hit, "To Be With You," was a Billboard Hot 100 number one single in 15 countries for several weeks in 1991, propelling the band the band to huge international success and record sales in the multi-millions.


Each of the band members is also a reputable virtuoso in the music industry. Billy Sheehan has won dozens of “Best Bass Player” awards in numerous magazines, including an unprecedented 14 years in a row from Player Magazine. Paul Gilbert, recognized as one of the top guitarists of this generation, has released several albums during the long hiatus, and designs guitars for Ibanez. Pat Torpey has been conducting clinics for Tama drums and releasing instructional albums, while Eric Martin has produced 8 solo albums and is recognized as one of the most distinctive voices in the rock world.

So enough with their resume…let's talk about the new album for 2011!

Once the needle drops (figuratively-no vinyl release that I am aware of), you'll find yourself wondering if it's the early ‘90s all over again. "What If" could easily have been the successor to the mega-hit "Lean Into It" from which “To Be with You” was culled. "What If" takes the listener on a raucous ride through an alternate reality of excellent musicianship and great vocal harmonies.  No new ground is broken on this release, but you will find well-crafted songs with Martin's strong vocals, some expert bass playing by Sheehan mixed with plenty of tasty licks by Gilbert all neatly kept in time by top notch drumming from Torpey. Shirley's production work is loose and makes you feel like the whole thing was done live.

This album is a primer in how a band can stay relevant, push boundaries and kick ass without selling out everything that made the band great in the fist place. "What If" is a very solid release from these veteran rockers who have not been present on the U.S. music scene for more than 15 years. Frontiers Records' new distribution deal for these shores may put this release into people’s hands, assuming there are still record stores to stock it in. Sadly, although there are rockers and a ballad that are radio-worthy, radio is brain-dead, so I'm not holding my breath for airplay.

If you are a fan of the band, hell has frozen over, the four original members got back together and this disc is everything long-time Mr. Big fans have hoped for all these years. Melodic rock fans new to the band ought to check it out as well-you just may find yourself scouring the record bins for their earlier material.