A COUPLE FROM THE VAULTS 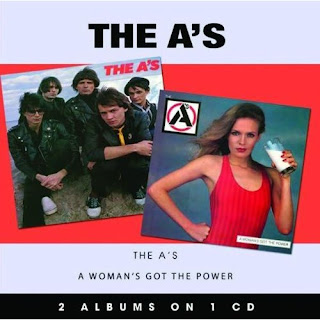 Long out of print on LP, and never before (to my knowledge) available on CD, these two "lost classics" finally saw a proper CD release on the American Beat label a year or so ago.


If you didn't live in Philly in the late seventies/early eighties, you probably never heard of these guys, a new wave band whp recorded two albums for Arista Records in 1979 and 1981 that failed to make a significant chart impact. Their self-titled debut album, The A's, was praised by Rolling Stone but failed to excite the record-buying public. The follow-up, A Woman's Got The Power, found the band taking a more serious approach with better song craftmanship and slicker production, and reaching the lower rungs of the US album chart. The title track received a lot of airplay on Philadelphia-area radio and clawed it s way up to #18 on the mainstream rock charts.

During that time, The Hooters, Robert Hazard and Tommy Conwell broke out of Philadelphia onto the national scene, and unfortunately The A's were on the verge but didn't quite succeed.

The first album is rawer, and starts off with the local hit, “After Last Night.” The album has an urgent and jittery (almost nervous) feel, with a tremendous radio pop sense and catchy hooks. The lyrics are pretty trite, but you'll want to break out that skinny tie and give this a listen any way. On the second album, the deeper, seasoned, more confident vocals and top-notch songwriting shows definite growth, although the slicker production takes them away from the new wave sound and into the more commercial, straight-ahead rock sound of the day, although the last song, Insomnia, jerks you back to the sound of their first album. There were a few songs on this album that should have been hits, and they deserve a listen all these years later.