M IS FOR MOUNTAIN “MASTERS OF WAR” 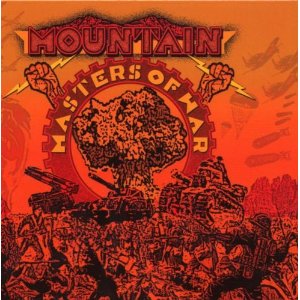 Another covers album-does ANYBODY write songs anymore? At least the Mountain album, "Masters Of War," has a (sort-of) theme-it's all Dylan covers.

I think I've documented my opinion of covers albums pretty well in past blog entries so I'll spare you fatihful readers. Come to think of it, do I have any faithful readers?


"America's first heavy metal band" has arguably applied a healthy dose of audacity to their entry in the seemingly endless wave of covers albums by aging artists, by recruiting Ozzy Osbourne (who recently completed his OWN covers album) to duet on the title track.

Now one might find the idea of Mountain covering Dylan to be somewhat of a mismatch.

The album finds Leslie West, Corky Laing and Richie Scarlet thumping and yelling their way through percussive, electric versions of Bob Dylan classics. In addition to the aggressive playing on the album, the production is big and powerful. The album is housed nicely in a digipak for you eco-sensitive listeners.

All in all, not bad for a covers disc.

Listen to Masters Of War

Listen to Blowin' In The Wind