K IS FOR THE KEITH REID PROJECT “THE COMMON THREAD” 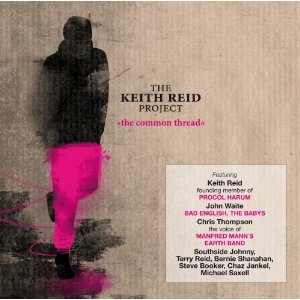 When I heard that Keith Reid was the driving force behind a new music project,  I was interested (as a Procol Harum fan). When I head that the list of singers included John Waite and John Lyon (Southside Johnny), it quickly moved onto my must-have list.


For those who may have forgotten, Keith co-founded Procol Harum with Gary Brooker in 1967 and together they created rock classics such as A Whiter Shade Of Pale. For this album, Keith has gathered together a highly impressive group of singers and songwriters around him, including Waite and Lyon , as well as Chris Thompson (Manfred Mann) and Chaz Jankel (Ian Dury), among others.

Since the album was an import only, I did the whole online-PayPal-take-it-in-the-shorts-on-the-currency-exchange order thing, and within a week the CD was in my greedy little mitts. Lemme tell ya, it does not disappoint.

The production tends to mimic the singer's catalog, which is not such a bad thing. The John Waite selections (especially "In God's Shadow") sound like they were lifted off of a JW solo effort-not so surprising, since John shares writing and arrangement credits. The Southside Johnny arrangements are very much in the Juke's style and could have been selections on his latest disc. Since I love both artists, this is not a bad thing for me, but if someone were to buy this album expecting "A Whiter Shade Of Pale" redux, they would be surprised.

The end product is an album of beautiful rock music that blends many diverse influences (blues, folk, Americana, Latin and Irish). Overall, this is an album full of great songwriting, some good hooks, great singing and playing, slick production….why are you still reading this? The URL is right down there-order it!

Listen to The Common Thread