In the interests of full disclosure, many of these are reviews that were previously posted on my blog on My Space, and while they are new posts to this blog, and new to most of you, they are not new work on my part, except for going and retrieving them from My Space and gathering cover images and alphabetizing them. I guess that’s work.


But that enabled me to get a head start, and since April is a pretty busy month for me, the head start allowed me to participate. Think of this as a way to catch up on some of the music you missed over the past few years, as I suspect that many of these artists you will not have heard of, although some, of course, are household names.


If reading any of these ramblings inspires you to go check out the artist’s music, I hope you’ll come back with comments on what you think after listening for yourself.


Links to soundbytes or video clips are highlighted in red. 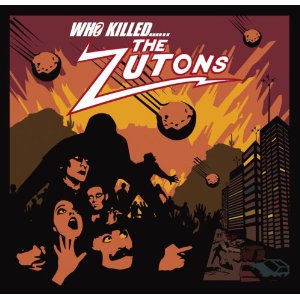 I saw The Zutons on a cable music show (Live From Abbey Road, I think), and liked what I heard, so I purchased this disc.

'Who Killed The Zutons?' is quite possibly the best debut album to arrive from Liverpool since the La's proved there was more to the city than Lennon & McCartney. It’s energetic, inventive & constantly surprising, and does not disappoint.


The Zutons start the album with their Monkees-styled theme tune "Zuton Fever", and proceed to crank out songs laden with British invasion R&B and vintage soul coupled with psychedelia, and add on some surf guitars and top it off with some sax, and it works.

This is one of the freshest new CD’s I have heard in a long time. Their sound is hard to describe or categorize, a raw sound that makes you want to sing along, seemingly combining Rock, Soul, Funk, Ska and Country into one big musical gumbo.

Watch You Will You Won't

A TO Z POST-MORTEM

Well there you have it. One album review for every letter of the alphabet. I hope you found something of interest and purchased a new record over the last month.

Was this whole thing really necessary?

Probably not, but kudos to Arlee and Alex and their usual band of suspects for hosting and promoting this blogfest.

Stick around, as I'll still post new music reviews frequently, just not at this pace!

And before I forget-happy birthday Mom!